Standing on the Shoulders of Giants

Occasionally, I hear writers say that they don’t read books in their genre for fear that they will be influenced. Horse feathers! Dancers mimic the instructor until they get the moves right. I learned to ride a horse by watching and listening to my trainer. I learned penmanship by copying letters from the model and, believe me, my handwriting is my own. So just trashcan that idea, which has long been termed the “fear of influence.” Rename the process: studying with the masters. 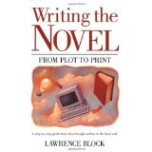 Lawrence Block, in his book Writing the Novel: From Plot to Print, advocates a purposeful study of books in ones own genre. Choose six books by six different authors and read them straight through. Then go back and read them again, analyzing their structure, style and effect. I’m doing this. I chose six books in what I describe as women’s literature. No series books, only stand alones, because each book demanded fresh invention of characters and setting, as well as storyline.

Here are my six:

Over the next few weeks, I’ll walk you through my discoveries and the effect this study has on my own writing. Already I see positive results and I have yet to reread Middlemarch, which is winging or trudging its way to me. The other five were new to me, even though the Atwood book had been standing patiently on my bookshelf and what a find that was!

This site uses Akismet to reduce spam. Learn how your comment data is processed.